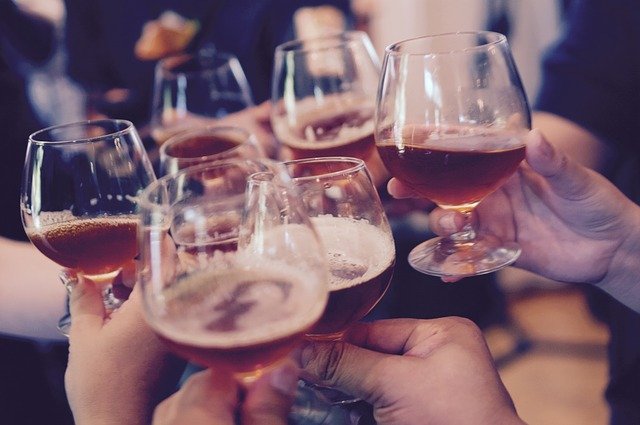 A 1989 study found that around 53% of people experiencing social anxiety “often or always” used drinking as an attempt to reduce their anxiety.1

Another study found that 100% of people seeking treatment for their alcohol use said they’ve used alcohol at least once to help cope with anticipatory anxiety regarding an upcoming social interaction.2

Needless to say, alcohol is a common route taken when trying to reduce social anxiety.

But, does alcohol help reduce social anxiety? Alcohol can help reduce anxiety symptoms in the short-term. However, the day after drinking, research has shown anxiety to be worse, especially for those who are shy. And reliance on alcohol to manage social anxiety becomes a vicious cycle that actually reinforces it, making anxiety worse, long-term.

In this article, I explore the impact alcohol has on social anxiety.

An interesting study examined how alcohol influences the brain’s reaction to seeing fearful facial expressions of others.3

When participants were given a placebo and shown images of facial expression that appeared to be experiencing fear, the Amygdala (the part of the brain that is responsible for anxiety and our fight or flight response) was activated.

When participants were given alcohol, there was a significantly less reaction to this part of the brian.

It’s also believed that alcohol may influence the part of brain responsible for emotions; simply quieting it and causing it to be less sensitive, in general.

When people come to therapy for social anxiety, this is exactly what they’re after: less anxiety, less sensitivity to the social world around them, and to take more social risks.

No wonder so many people turn to alcohol. In the short-term, it instantly gets the desired results.

However, just like everything in life, the quicker the “fix,” the heavier the consequences are to pay later.

One consequence of the quick “fix” of alcohol is “Hangxiety.” Hangxiety is a non-clinical term referring to anxiety as one comes down from alcohol. Often it’s experienced the morning and day after a night of drinking.4

Hangxiety, though not a clinical term, is a real thing. In studies, it’s been seen to happen in both animals and humans.5

Why does Hangxiety occur? In short, anxiety after drinking is the result of your brain readjusting to not having the calming effects of alcohol any longer.

Think about being in the dark for hours and all of a sudden bright lights are turned on. Or imagine being in warm spa and then suddenly jumping into ice water.

It’s the same for our brains coming off of alcohol. Hanxiety is essentially alcohol withdrawal.

Alcohol impacts chemicals and chemical receptors responsible for anxiety creation and regulation. Take alcohol away, and the brain needs to readjust.

Hangxiety is especially important and relevant to social anxiety, because it’s very likely that anxiety symptoms, after a night of drinking, are stronger for those who struggle with social anxiety.

A very important study looked at the possibility of there being a link between the intensity of Hangxiety symptoms and people who are shy.6

The study found a positive association between hangxiety and people who are shy. That is, shy people are more likely to experience anxiety symptoms and the symptoms are likely to be more intense than others, after a night of drinking.

What about cognition after a night of heavy drinking?

Whether a drinker or not, most people who experience social anxiety report post-event rumination after social interactions.

Though I have not found research on this, it’s a common report from clients and I think fairly safe to speculate that drinking can impact post-event rumination the day after drinking.

Post-event rumination is the mental act of reviewing interactions or performances after they occur. It usually involves questioning and doubting ourselves, and trying to answer questions that can’t be answered (e.g., “What did they think of me?,” “Did I make a fool out of myself,” etc).

Rumination you can think of like a cow chewing grass. Our minds chew over negative thoughts, questions that can’t be answered, and imagine what other people were thinking of us the night before. It’s slow and never ending. It’s the illusion of problem solving.

When memories are vague or gapped, the imagination loves to fill in gaps on its own. And the socially anxious imagination is highly creative and highly negative. A dangerous combination.

As a result, it will likely come up with distorted and overexaggerate images of how they were acting the night before.

It will also likely struggle with the uncertainty of not knowing, without a doubt, what they said or did:

“I don’t remember exactly what I said. I just remember being loud and there being many people. Oh man, what exactly did I say? I must have said something inappropriate. What will people say about me?”

And as the brain chews over these “What if” scenarios and distorted, negative memories, intense, negative emotions follow: shame, embarrassment, anxiety, and fear.

The loss of inhibition the night before will likely cause someone who is socially anxious to experience more anxiety as the alcohol wears off and their inhibition kicks back in.

As their inhibition comes back, it becomes the baseline for judging their risk taking behavior the night before. And

What Are Safety Behaviors?

Safety behaviors are strategies used by someone experiencing social anxiety in attempt and in belief that it will lower their anxiety, but in reality, it maintains their anxiety long-term.

For example, maybe someone experiencing intense anxiety in public speaking uses a podium with the intention of hiding any possible shaking or other signs of nervousness. In this example, this person is socially anxious about others seeing her nervous. An internal dialogue that may go something like: “If they see me nervous, they’ll think I’m going crazy, they’ll negatively judge me, and I won’t be able to to cope with the situation.”

The podium keeps this person “safe.”

In reality, the podium just keeps the anxiety cycle intact. It even reinforces it. The podium prevents the person from confronting their flawed thinking that they will look crazy, that everyone will negatively judge her, and most importantly, she won’t be able to cope.

Research has shown that when people use safety behaviors during a uncomfortable social interaction, it actually increases their anxiety, even though people believe it using them would help lower their anxiety.

The important thing about safety behavior is the intention and the motive behind the behavior. Two anxious people can engage in the same behavior and one could be considered a safety behavior, while the other is not.

For example, using the podium is a safety behavior for the example person above because she’s trying to hide signs of nervousness.

Another person, who’s main concern is centered around others seeing him blush. This person uses the podium simply because he needs a place to put his notes. He doesn’t want to hold the notes.

Alcohol As a Safety Behavior

Is alcohol use considered a safety behavior? Just like the examples above, it depends on the intention.

If someone is using just to have a good time, and isn’t really considering their anxiety. Then it’s probably not considered a safety behavior.

If someone is using it to help relax or avoid their anxiety in social situation, this is definitely a safety behavior.

It’s likely that most people who are social anxious use alcohol as a way to cope with their social anxiety. They use it so that they relax, socialize more, and to be less socially inhibited. That is, they use it as a safety behavior.

The Vicious Cycle of Social Anxiety and Alcohol

Anxiety is tricky because it tells us to do the very thing that will keep reinforcing itself.

Anxiety is a good liar.

If you ever felt intense anxiety, logically you know you’re going to survive the situation, but the anxiety is so intense and so real, it’s hard to do anything else but follow its advice.

And when we follow anxiety’s advice, we get a reward: relief.

This is the vicious cycle of anxiety.

And as mentioned before, avoidance comes in different forms. Not going to a social event is clearly avoidance.

But drinking before the social event, might not be so obvious:

It’s dangerous because of how covert it can be. It doesn’t seem like avoidance. We’re still going to the event.

It’s also dangerous because of the health consequences. If it’s used on a regular basis, we can become reliant on it. That can do a number on our body and our brain.

Lastly, it’s dangerous, because it reinforces the anxiety. And the longer we avoid, the more intense the anxiety will get. The more we’ll rely on the alcohol, and things slowly start to get harder.

I won’t go into detail here about how to get out of this cycle if you’re in it. I recommend going to my Self Help section for that.

In short, the only way to escape the cycle of anxiety is to do the very thing anxiety tells us not to do.

Here are some important things to remember though: